How High is the Risk of Shingles Recurrence? 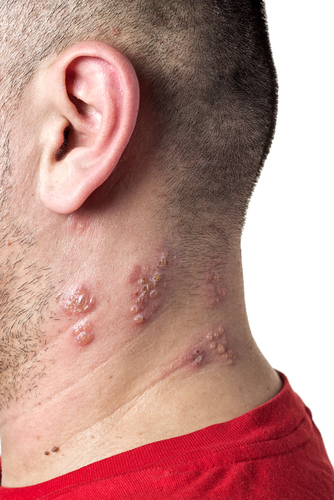 If you are like most people, when you hear the word shingles you automatically think of those decorative little squares on the roof of your home. They work to protect your house from rain and other problems caused by Mother Nature.

You may not know that shingles is also the name of a very serious disease. Like the shingles on your roof, the shingles virus can cause major damage and complications without the proper attention. Once you have suffered through that kind of pain, it is important to find out if you are at high risk for shingles recurrence.

What exactly is shingles?

Getting the chicken pox is like a rite of passage for many kids. They can swap stories about how bad the itching became, the icky feeling of being covered with ointment, and the number of days they missed school.

There was even a time when parents would purposely expose their child to the chicken pox, by having them spend time with another infected child, just to get it over with. Other than the incessant itching and the minor possibility of scarring due to scratching, chicken pox has always been viewed as a relatively harmless illness that all children get at some point during their elementary school years.

Indeed, acquiring the chicken pox as an adult tends to be much worse, with additional complications that do not occur if you get it in childhood. Therefore, most of us suffered while we were young and have now long forgotten ever having the chicken pox.

It was believed that, once you got through the disease, you never had to think about it again, or at least not until you had children of your own. We now know that this is not entirely accurate.

The truth is that chicken pox is caused by a germ called the herpes-varicella-zoster virus. This virus never really goes away so it just hangs around in your body long after your chicken pox glory days.

While the zoster virus does not cause you to get chicken pox ever again, it is the origin of a different type of disease called shingles. A majority of people who had chicken pox as kids will never get shingles because your body’s natural defenses help to keep the virus suppressed. However, in some folks, the virus breaks through and awakens, and this produces shingles.

Shingles is a lot more serious and painful than its childhood predecessor. With chicken pox, you generally feel the effect on your skin, but shingles is a disease that upsets the nerves and the surrounding exterior of the body. It exclusively occurs in the areas on your body where the nerves in your spine and those on your skin connect.

People who develop shingles typically describe the associated pain as a searing or piercing feeling that can cause significant discomfort in the affected area. If you get shingles, you will know it because it also comes with a nasty rash and bumps that resemble chicken pox.

For many people who get shingles, the signs are relatively slight without much fanfare, and it all goes away in about a month. Others encounter major nerve pain that can remain indefinitely.

Do people get shingles more than once?

Like chicken pox, once you have endured shingles, you should not have to worry about getting them ever again. Nevertheless, there are instances where people have suffered a recurrence of the disease. This usually only affects those whose normal body defenses are already fragile due to other conditions such as Acquired Immune Deficiency Syndrome or treatment of diseases like chemotherapy for cancer.

Although shingles is considered contagious, you cannot contract it directly from an infected person. Someone who has shingles can trigger chicken pox in those who never had the disease. On the other hand, if you are healthy and already had the chicken pox, you would not catch shingles from someone else. Since shingles has consequences for the immune system, anyone who is currently afflicted with the rash or open blisters should steer clear of those with compromised defense systems like babies and sick people.

How are shingles treated?

Now that we know more about shingles, there are a variety of treatment options for those affected. For the minor itching and rash, your doctor may recommend that you simply choose your garments wisely. Don’t wear clothes that will serve to further irritate the condition, like scratchy fabrics or body-hugging outfits. Some people have also found success with over-the-counter ointments for itching and creams or gels that contain aloe.

The pain that comes with shingles can often be relieved by using one of the many options available on the drugstore shelves. For people who are living through major complications or nerve pain, your physician may prescribe one of several types of medications proven to help, such as those mainly used for depression or convulsions. You could also find assistance by taking medicines that are explicitly created for fighting viruses.

The Response of Biopharma Industry to the COVID-19 Emergency

What is a Gallbladder Attack?