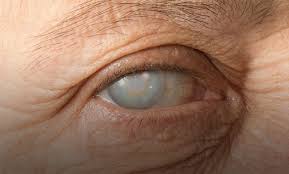 Cataracts are cloudy spots on the lens of the eye. Normally, the lens is completely clear and allows light to pass through the eyeball to the back so that images are clear and sharp. However, if cataracts cause the lens to become opaque, the patient’s vision will be affected. Cataracts can affect one or both eyes and may vary in degree; some patients have very mild cataracts while others are nearly blinded by them. Cataracts tend to worsen over time.

Patients with age-related cataracts may not notice anything wrong at first except a slight fuzziness to their vision, but eventually they will find that they have trouble reading, driving a car, or recognizing familiar faces. Cataracts do not usually cause pain, but they will gradually erode vision, usually starting with long-distance sight and progressing to near vision.

Cataracts are the most common eye condition in the world. They are very common in developing countries, especially among the poor who cannot afford eye treatment. Both men and women are affected about equally by cataracts, and one-third of all people in the world over age 65 will have cataracts in at least one eye.

Are There Risk Factors For Cataracts?

The most serious risk factor for cataracts is age. Half of all people in the United States over 65 suffer vision problems from clouding, and 70 percent of those over age 75 have significant cataract vision impairment. Other risk factors include family history of cataracts, diabetes, radiation exposure, long-term sunlight exposure, use of corticosteroids, previous eye injury or inflammation, exposure to lead and loss of crystallins protein function.

What Are the Symptoms of Cataracts?

At first, the symptoms of cataracts may go unnoticed or may be attributed to other causes. For example, someone with a mild cataract may complain about being unable to distinguish the outlines of objects such as writing on signs or may think he or she has something in the eye frequently. However, as the disease progresses, the symptoms become less easy to ignore. By the time many patients seek treatment for cataracts, the disease has usually progressed to the point that it is almost impossible to ignore due to the loss of sight.

Most people will experience cataracts in one eye or, if in both eyes, they will find that one eye is more severely affected. Common symptoms include:

Cataracts are not usually visible to anyone looking at the eye.

Cataracts are diagnosed by an eye doctor using several tools and tests, including:

Patients who are diagnosed with cataracts may undergo surgery to correct the problem. After a certain point, surgery may be the only viable option to treat cataracts. Until that time, however, victims can use eyeglasses or magnifying glasses for reading, try using halogen lights in the home, wear sunglasses to reduce glare, and avoid night driving.

Doctors may recommend eye drops, new eyeglass prescriptions, or other treatments that can provide comfort for patients who are not ready for surgery. However, surgery is the only permanent, effective treatment for cataracts.

Cataract surgery is usually covered by Medicare and many health insurance policies, unlike Lasik and other elective eye surgery. Cataract surgery is considered necessary, whereas vision corrective surgery that substitutes for glasses or contacts is considered elective. However, patients should be sure to check with their insurance companies prior to scheduling surgery to determine how much the insurance will cover.

Can I Get Pregnant After 40?

What is the Mumps?